Her Life And Work

Anne Rice is an American writer known for working in the Gothic and Christian genres of literature. Her most famous work is a series that centres on a vampire called Lestat. Rice was born in New Orleans in 1941. She later moved to Texas and San Francisco. These places have had an impact on the settings for her books.

Her career as a writer started with Interview with the Vampire, which was published in 1976. This was later turned into a successful film starring Brad Pitt and Tom Cruise. This book soon turned into a series which Rice continued to write for several years. However, during the 2000’s she shifted her preferred genre to Catholic literature.

Her religious writings have included Christ the Lord: The Road to Cana and Out of Egypt. These concerned fictionalised times throughout the life of Jesus. After this, Rice decided to distance herself from organised religion. This is due to her disagreement with the Catholic Church’s stances on important social issues. Currently she identifies as a secular humanist.

Rice has sold close to 100 million copies of her work over the past few decades. This has made her one of the most popular and enduring American authors in 20th century history. Her early books were given a mixed reception. However, critics were more favourable of her 1980’s work. Her style and content continue to be given deep analysis by literary academics. 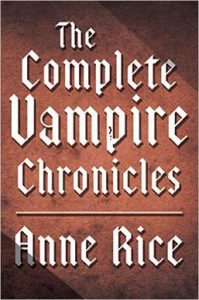 The vampires in the novels of Anne Rice are unique. Each one is endowed with their own special supernatural powers. Very old ones are able to gain strength from feeding on human beings. Others have innate artistic skills that are a direct result of their vampirism.

Some of these vampires can perfectly mimic the sounds of other people’s voices and even musical instruments. All of these creatures have an enhanced sense which includes emotional and sensual sensitivity. This allows them to better hunt down their prey.

Unlike traditional vampires, these ones are not weakened by holy objects or garlic. However, they can still be destroyed with a stake to the heart. Sunlight will also cause them to burn to death. Additionally, if these vampires feed on a dead organism then they will be severely harmed.