Beatrix Potter was a highly respected children’s author born in 1866. She began work as a natural scientist but is most well known for her novel series which features the character Peter Rabbit. In the years that have followed, Peter Rabbit has gone on to become an important icon of English culture.

Potter had an isolated childhood and spent most of her early years exploring the landscape and wildlife of rural Britain. She would often holiday in the Lake District and Scotland. These areas would have an influence on the settings of her stories, as well as the animals that appeared in them.

Like most women at that time, Potter was limited in the amount of education opportunities offered to her. Despite this, she rose to prominence in the field of mycology. During her thirties she self published The Tale of Peter Rabbit. This would soon develop into a long series of books following Peter and his numerous animal friends. She also illustrated these books with acclaimed artwork. 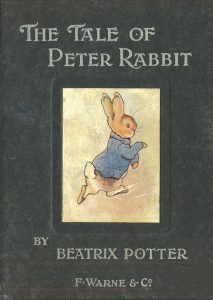 Jemima is a Aylesbury duck who dislikes living on a farm. She decides to search for a new home where she can lay her eggs in peace.

Tom is the son of Tabitha Twitchit. He and his siblings become disorderly in their bedroom while Tabitha hosts a tea party.

He is a rebellious red squirrel who escapes from an owl known as Old Brown. This squirrel is one of Potter’s most popular characters.